TIME-ZONE LABS - In the News Today 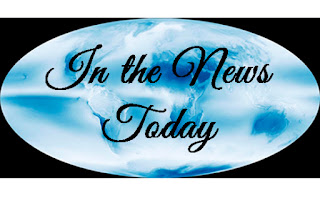 I don't know about anyone else, but I am so glad the holidays are over. Not that I do much for the holidays, it's just that I get a bit depressed - I don't want to leave the house because the traffic is so bad and there are so many people out and about - I get a little claustrophobic just trying to buy groceries. Anyone out there know that feeling? Worst part is, I don't even want to get on the computer or do much of anything else. I've just been spending a lot of time watching birds outside the window with the cats. But the new year is upon us, and so far it seems like it's going well.  At least, I'm back on the computer and I am going to try to do some sewing today! LoL

Some may remember that I wrote previously of being involved in a study group for a new test drug for Alzheimer's that would prevent the amyloid build up in the brain. That study ended early for various reasons, but mainly because it didn't seem to be working the way it had been hoped. Because of that, I got very excited when I found this article:

This is great - something new to focus on to give us all a new hope of learning how to  prevent Alzheimer's. If a new drug is developed and test subjects are needed, I will be right there to volunteer!

Here is a great article from the Alzheimer's Association's blog about what we learned in 2019 about the disease:

Alzheimer’s and Dementia Research: Five Things We Learned in 2019

And from Kaiser Health News, some good information for helping seniors learn to live longer in a healthier form:

I know I need to do a few of these things!  Until next time!

ENTER TO WIN A FREE T-SHIRT!!
Easy entry through Rafflecopter!

Thank you for
Supporting Dementia Research!


What are we without memories?
Posted by Librarian, T-ZL at 4:00 AM