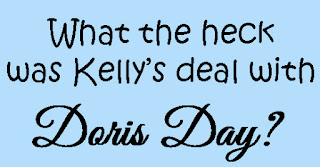 If you have read the Remembering Kelly page, you might remember I wrote that Kelly was really into conspiracy theories. The theory I specifically mentioned was something he thought about Doris Day and how it was sad that he didn't live long enough to find out he must have been right. I received a question to please explain what the Doris Day thing was all about. So here it is...

Kelly's theory started around the time Rock Hudson died in 1985. Kelly started wondering how many of Doris Day's leading men were still alive. This was before the Internet, especially IMDB, so Kelly drug out what we considered our family bibles - Ephraim Katz's The Film Encyclopedia and a copy of Leonard Maltin's Movie Guide.

Kelly made a list of Doris's movies over the years, and her leading men with their birthdays and (when available) deathdays. At the time of making the list, which was pretty long, more than half of the men had already passed. Through the 80s and 90s and as long as he was able in the 2000's, Kelly kept this list updated and the men kept dropping off, while Doris stayed in perfect health.  After Kelly was gone, I kept the list updated, because, well, something like that you gotta see to the end.

This led Kelly to believe that Doris was an alien, who was sucking the life out of these men - she was using their life force to stay alive. Kelly figured as long as her leading men didn't write their own biographies and expose her, she allowed them to live - some had pretty long lives. But he just knew they were all going to die before she did.

And guess what? On February 14, 2015, when Louis Jourdan, Doris's co-star from the 1956 movie Julie died at age 93, all those actors were gone.  Doris died on May 13, 2019 at age 97. I guess the life force she got from Louis was enough to keep her going for a couple more years to make sure no one else exposed her.

Crazy, right? But, that was Kelly, and he was right. Maybe this proves that Kelly really did know something about time travel?

ENTER TO WIN A FREE T-SHIRT!!
Enter through Rafflecopter!
Thank you for
Supporting Dementia Research!

What are we without memories?
Posted by Librarian, T-ZL at 4:00 AM